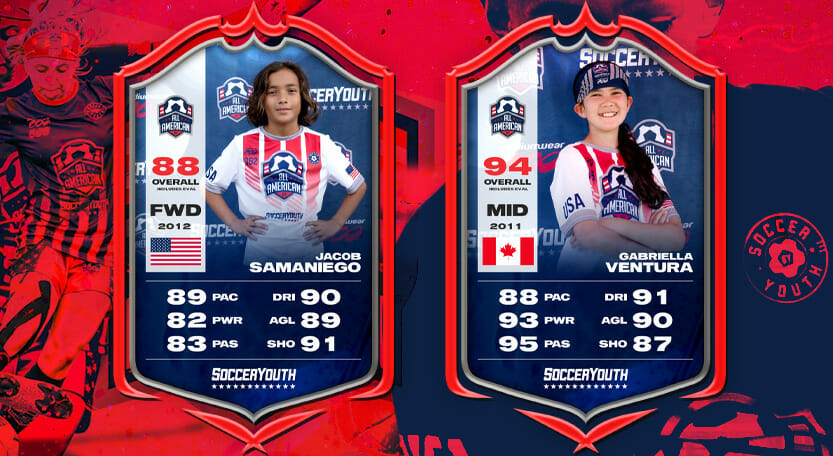 Each All-American Series location features a Player Card Combine during the event allowing the players to participate in six different skill testing stations to determine their stats for their official Soccer Youth Player Card, like what you might see with a FIFA card.

The Player Card Combine is a great way to determine where your player stands in comparison to other players from around the country in your players age group. A scaled rating system based on the specific birthyear and gender of the player is used to determine the scores.

The six drills are listed in the tabs. These drills test your players ability in six key areas of the game, showing your player where they need to improve their game.

All players cards (in a digital format) are released after all the summer events are completed and uploaded to player’s profiles on socceryouth.com.

WHAT IS ON THE PLAYER CARD

What to expect on the Player Card:

HOW EACH STAT IS DETERMINED

The Combine includes six drill testing stations, one for each stat. The Overall Rating (OVR) is the average of the six stats.

Station 1: Pace (PAC) – Involves a 30-yard dash station with lasers at the start and finish to accurately record the player’s 30-yard dash time.

Station 2: Power (PWR) – Players have 3 balls to kick as hard as they can into a goal and their top speed is recored from the Pocket Radar System.

Station 6: Shooting (SHO) – Players participate in the Sharp Shooter Challenge. Players shoot 15 soccer balls and 1 golden ball into a goal covered by the SKLZ net, with only the corners of the goal open. Each player has 15 soccer balls lined up at a specific distance (15 yards for players born in 2011 and after, 18 yards for kids born before 2011), and a golden ball at a farther more challenging distance. The points system is as follows: top corners are 20 points, the bottom corners are 5 points, and the golden ball is worth double the number of points depending on the corner you place it in. All shots, including the golden ball, must be taken within the one-minute time frame.

The rating each player receives for each stat depends on how they compare to the rest of the players in that age group.

The Player Card Combine takes place at certain designated times at each All-American Series event. Detail times with the Event Itinerary will be sent to all players as we get closer to the event date.

The Player Card Combine is additional Add-On Opportunity that costs $99 per player. To register, scroll down to fill out the below form.

WHEN PLAYER CARDS ARE RELEASED

All Player Cards ratings are released after our All-American Series events are completed for the summer. This allows us determine accurate ratings for each player by using a scaled rating system for all players we see this summer based on the specific birthyear and gender of the player.

All cards are uploaded to player’s profiles featured on socceryouth.com and emailed to each player for their own social platforms.

REASON TO PARTICIPATE IN THE COMBINE

The Player Card Combine is a great way to determine where your player stands in comparison to other players from around the country in your players age group.  There is a wide variety of drills that go into it and can help show where your player might need to improve your game.

WAY TO IMPROVE THE RATING FOR THE YEAR

LEXA Sport is the Official Uniform Supplier for Soccer Youth!